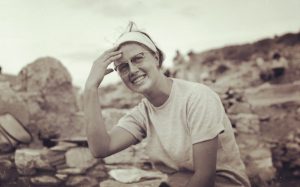 (French and Dutch texts below).

Born in Deurne (near Antwerp), Frieda studied archaeology at the University of Gent where she defended her NFWO-funded PhD in 1966 with a study on Cypro-Geometric pottery under the direction of H. Mussche. It is also with Mussche that she acquired her first fieldwork experience at Thorikos from 1963 onwards, in the recently started first Belgian project in Greece. Between 1967 and 1970, she was a Belgian member of the French school at Athens, during which she participated in fieldwork of the school at Malia, on Crete, at Argos in the Argolid, and at Amathus, on Cyprus. Called back to become professor of Mediterranean archaeology at the newly founded Vrije Universiteit Brussel (VUB), the Flemish counterpart of the ULB, she remained at the university till her retirement in 2001. It is also at the VUB that she inaugurated a long tradition of Cypriot studies, which continues to this day.

Her fieldwork in the Mediterranean was extensive, taking place both on Cyprus, at Amathus, and on Crete, at Malia, as well as at Argos, Thorikos and the Kitsos Cave on the Greek mainland and at Apamea in Syria. Her impressive publication record clearly reflects a double scientific interest for Cyprus and Crete. Hence, on the one hand, her books on Cypriote antiquities in Belgium (1990, with R. Laffineur) and on Figurines on Cypriote Jugs holding an Oinochoe (1998), both in the SIMA series, three volumes of proceedings of international conferences on Cypriote Terracottas (Brussels-Liège-Amsterdam, 1989), on Cypriote Stone Sculpture (Brussels- Liège, 1993) and on Four Thousand Years of Images on Cypriote Pottery (Nicosia, 1996), co- edited with R. Laffineur and V. Karageorghis. She was also instrumental in the organisation of a Cypriot exhibition at the Royal Museum of Mariemont in 1982, which gave rise to a catalogue Chypre: 8000 ans de civilisations entre trois continents, and the creation, with R. Laffineur, of a FNRS/FWO contact group on Cypriot studies. And, on the other hand, her Cretan research, as illustrated by a guide to the Palace of Malia and Chersonisos (1992) and, with Jean-Pierre Olivier, her partner who left us in January this year, of the volume Les idéogrammes archéologiques du Linéaire B (1979). Her input in volume 2 of the excavations of Quartier Mu at Malia, in which she participated, was also considerable. Hers was the first attempt to provide an archaeological background to the written documents of the Aegean Bronze Age and her paper on the chronology of Linear A documents of 1985 (Bulletin de Correspondance hellénique 109) remains a milestone. In addition, she authored many publications in the Bulletin de Correspondance hellénique, Kernos, Cahiers du Centre d’Etudes chypriotes, L’Antiquité Classique and the Revue des Etudes anciennes. She is also the author of several publications in her native language for the Tijdschrift Mediterrane Archeologie and many book reviews. Her extensive Cypriot library and archives, together with those of Jean-Pierre, were donated to the Centro Internazionale per la Ricerca sulle Civiltà Egee ‘Pierre Carlier’ in Oristano (Sardinia).